I don’t change the “@leftymathprof” part of my Twitter name, but I change the other part from time to time. In late January 2022 I changed it to “methane thaw” to bring attention to some aspects of the climate apocalypse. It is coming bigger and faster than most climate activists and mainstream climatologists are saying, and addressing it requires bigger changes in our socioeconomic system than they are saying. I’ll explain. 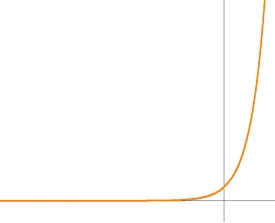 The world, and especially the Arctic, is warming very fast. It’s going to warm faster and faster, because of feedback loops. Here is one example: As the ice over the Arctic Ocean melts, the white surface is replaced with a dark surface. So less sunlight is reflected into outer space; more is absorbed as heat. Thus, heat causes melting which causes more heating; that’s a feedback loop. Such loops cause exponential acceleration, which means it increases faster and faster; the current rate of increase is proportional to the current size. Look up “exponential growth” in Wikipedia. The stories at the end of that article may be particularly illuminating to beginners. Or look up rabbits in Australia.

What happens in the Arctic doesn’t stay in the Arctic. The warming in the Arctic spreads to the rest of the world in a variety of ways. And the warming has already weakened the polar vortex; that is causing lots of “extreme weather” throughout the northern hemisphere.

There is an enormous amount of methane frozen under the Arctic. A little of it is already bubbling out, entering the atmosphere. Methane is a greenhouse gas much more potent than carbon dioxide. As the Arctic warms more, the methane will leak out faster. Already, seventeen big “gas emission craters” have been found in Siberia, each apparently created in a big explosion. (In the photo at right, the little dots beside the crater are people.) 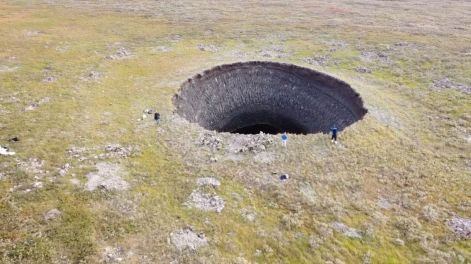 We may get many more of these big craters, or perhaps the methane will all burst out in one gigantic explosion on a particularly warm day. Either way, Earth’s temperature will rise rapidly. My Twitter name “methane thaw” is an attempt to call more attention to this phenomenon.

The ecosystem will have cascading failures – that is, the failure of one part causes failure of another part, and so on. It looks to me like famine by 2030, barbarism by 2035, extinction by 2040. But some people keep talking about flooded cities in the year 2100, as though we don’t need to take any action until 2090.

Admittedly, I’m only a mathematician, not a climatologist. But the climatologists keep understating the problem! Every year they publish an announcement saying something like, “Once again climate has worsened far more than our models predicted, so once again we are revising our models upward.”

And I have a different view of the politics, too. Most climate activists seem to think that if we just wake up the public, we can make a few little changes in our way of life, and we can fix things. I believe they are greatly understating what kind of changes we must make.

Look at it this way: For decades the politicians have been subsidizing oil companies and ignoring climatologists. The politicians are depriving even their own children of a future! That has been the consistent behavior of too many politicians for too long, so it can’t be explained by random chance or just a little bit of corruption; it must be a systemic problem. We all see some of the symptoms, but few of us see the fundamental causes, because they are not discussed in the “mainstream” news. That’s really the corporate news, and it is owned by the same few people who own nearly everything else. Those people profit from the current system, at least in the short run, and so they only hire reporters who do not advocate major changes.

First of all, our so-called “democracy” is really a plutocracy in disguise. That means “rule by the rich.” Gilens and Page proved statistically in 2014 that, regardless of elections, the rich get the public policies they want and the rest of us don’t. Gilens and Page’s data only covers recent decades, but a glance at history shows that we’ve had plutocracy in different forms – warlords, aristocracy, industrialists, technology monopolists – for 12,000 years, ever since we switched from sharing to hoarding.

So some people say that “all we have to do” is get the money out of politics. Sure. We just have to get the corrupt politicians to pass laws against corruption. That’s not going to be easy, and I don’t know how we will do it. But surely the first step is simply to make more people aware of the problem.

But actually the rich are only smart about one thing: making money. The wealthy class has evolved by natural selection: To get into the wealthy class or to stay in the wealthy class, a necessary (but not sufficient) condition is that you must devote nearly all your attention to making and keeping money. And the rich are constantly competing against each other for their fortunes. (For instance, Walmart is currently losing market share to Amazon.) And so the rich don’t have time or resources for other concerns such as saving the world. Their attitude is

“let someone else worry about that – right now I’m more concerned with making some money.”

And they must focus on short-term private profits, because their investors will quickly switch to any money manager who can offer faster profit. Thus, they cannot plan for the future.

And why are the rich so corrupt? Well, they are insulated from everyone else, and don’t need to care about everyone else; thus their empathy atrophies. To justify their wealth to themselves, they may invent stories about how the poor are lazy and undeserving; they may come to believe those stories; they may even come to believe that the poor deserve to be punished. Conversely, power attracts those who are already corrupt; sociopaths are best at climbing the hierarchies of power.

The corruption means that the rich and powerful do terrible things to make themselves richer and more powerful. For instance, all the wars are based on lies to make a few rich men richer. So most of our top politicians are liars, thieves, and mass murderers. This is why we’ve had war, poverty, and other torments for thousands of years. Admittedly, a few torments are new: Modern science and technology magnify everything we do, wise or unwise, and the unwise is really piling up.

The corruption is not just in the rich. You and I are forced to compete against each other for our livings. That kills empathy, replacing it with fear, hate, lies, scapegoating, etc. That may explain the high rates of loneliness, despair, suicide, and mass shootings. (By the way, if anyone reading this is suicidal, I urge you to join a political activist organization.)

For thousands of years, aside from a few brief fluctuations, economic inequality has been enormous: Most wealth has been concentrated in very few hands. That consistent behavior couldn’t have just happened by random chance. It had to be a result of something very basic and simple in our economic system. I would say it results from trade. If we don’t share, we must trade. Voluntary trade may benefit both traders, but it gives greater benefit to the trader who is in the stronger bargaining position. Thus trade, even when honest and voluntary, increases inequality. And dishonesty and coercion strengthen the plutocrat’s bargaining position further, thus increasing inequality even more.

Trade is inherently ecocidal. It works like this: Any trade is negotiated between a buyer and a seller. But it may have side effects on other people, harms that are outside (external to) the considerations of the buyer and seller. These harms are called “externalities” or “externalized costs.” No corporation would be profitable if it had to pay for its externalized costs. Generally the externalized costs are ecocidal. They are now destroying the ecosystem; that will kill us all if continued. Thus the alleged efficiency and wisdom of the market are just myths.

So I say that we must return to sharing, or we’re doomed.

Reformists say that we can fix things by less drastic measures. We can reform capitalism; we can harness greed. That’s like saying we can sign a contract with Satan, and hope that all the contract’s loopholes work out in our favor. But don’t count on it. Satan has more and better lawyers than we do, and moreover he’s not averse to cheating.

We need to spread this understanding. And we need to do it quickly. The climate clock is counting down; the frozen methane is thawing out.