Perhaps a more accurate title would be “some stages of political awakening that I went through.” But I believe that many other people go through similar stages. Generally it’s a one-way process, because once you see certain things, you can’t unsee them.

Really I have two meanings of “awakening” in mind. One that is simpler to describe involves your activity level, with these stages:

People do nothing if they think everything is okay, or if they don’t care, or if they believe there’s nothing they can do about it. What may wake them to level (b) could be something very good (e.g., a politician they like begins his campaign for president) or something very bad (e.g., a politician they don’t like gets elected, or the fall of the three towers in the World Trade Center, or whatever).

What wakes them to activity level (c) is an improvement in their awareness of what is really going on in the world, and their understanding of what really works or doesn’t work. And that’s the other kind of awakening, to which the rest of this essay will be devoted. 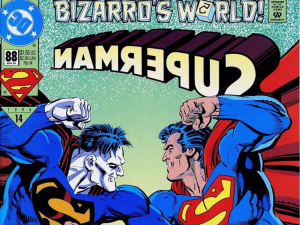 The starting position is to not be aware at all; I would call that “stage zero.” In this stage, you simply aren’t paying any attention to the news. Perhaps you vote once every four years, and that is the extent of your political involvement. And you vote for one of the two major parties, the one your family has chosen for decades, because it’s “good” and the other one is “bad.” You listen to the news sources that seem truthful to you — FOX if you’re a Republican, MSNBC if you’re a Democrat.

Perhaps some particular issue arouses your concern. Or perhaps some politician will get caught in some crime worse than you are accustomed to — e.g., he may get caught starting a war for lies, or lying about global warming. This might trigger your awakening to the first stage of awareness: You begin to actually pay attention to some things. You begin to be concerned and involved, and perhaps you join some local activist group or committee.

But you still see your party as knights in shining armor, and blame all the troubles of the world on The Bad Party. If only we could elect more people from The Good Party, that would solve all our problems. For some people, this is as far as the awakening process ever goes.

However, in recent decades, the internet has increased the variety of available information, and so some people go further. The second stage of awareness begins when you start to notice that your Good Party is flawed. 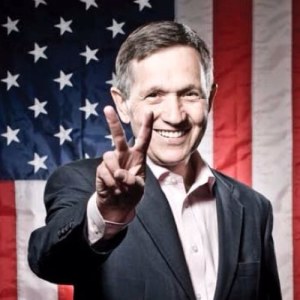 This might be triggered during election primaries, when you’ve picked one particularly good candidate to support (e.g., Kucinich or Sanders) and you see him being treated unfairly by the people running the Good Party. So the Good Party isn’t completely good after all, though it’s still certainly better than the Bad Party.

But then comes another awakening, into the third stage, when you see that the two parties really aren’t very different. It might be triggered when power is transferred from one party to the other, and you notice that this leaves many behaviors of government entirely unchanged. You notice that the unjustifiable wars, the poverty, the ecocide, etc., are all bipartisan in action, though the two parties may differ in the speeches they make. 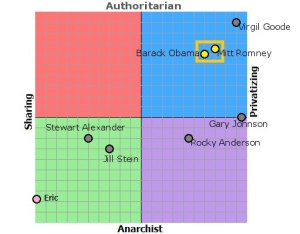 You might notice the similarity during one of the elections. A great example was in 2012, when Romneycare ran against Obamacare — two different names for essentially the same insurance company scam. Chomsky said “The smart way to keep people passive and obedient is to strictly limit the spectrum of acceptable opinion, but allow very lively debate within that spectrum.” See the accompanying diagram (edited slightly from Political Compass).

So what is causing all our problems? In stage three, you may still believe that our society is based on good principles, but apparently we’ve strayed from those principles into corruption. A lot of crooks have gotten into office. We need to “drain the swamp,” evict all those crooks from office, perhaps even jail some of them. We need a clean sweep, to replace the crooks with a “brand new congress.” That way we can get back to “normal life,” the “good old days,” the way things were before we started losing our democracy. Again, for some people, this is as far as the awakening process ever goes. Many people in this stage call themselves “woke” (that’s past tense), believing they already have it all figured out.

After that comes stage four, though perhaps it doesn’t deserve a number of its own — it’s only slightly different from stage three. And far fewer people reach this stage, and I haven’t figured out what triggers those people to get here. Perhaps you’re wondering why so many crooks keep getting into office, election after election. You realize that the crooks holding office may be willing agents of the problem, but they are not the source of the problem. The source is some little error in the system. It might be the electoral college. It might be the money in politics. And so you join a campaign to make one little change in the constitution. Just think, one little change in the rules could solve all our problems! That’s good news! We don’t have to change our whole way of life! Once we make this change, we can resume our “normal lives”; we can get back to “the good old days.” Again, very few people get beyond this stage; people who stop here also call themselves “woke.”

A few people get to stage five, the highest stage that I’m aware of, the stage I would call “radical.” I don’t know how people get to this stage; it’s a big leap from four. In this stage, people realize that we have a BIG error in the system. They realize that what we are in danger of losing is not our democracy, but our illusion of democracy. The big corporations, and the press and government they own, have been lying to us about everything. There never were any “good old days,” and the world we need to create is one that has never existed before. The problems all around us are actually caused by elements of what we formerly saw as “normal life” — e.g., an entire economy and culture based on not sharing with others or caring about others. The different parts of the old life perpetuate each other; to change any part of the world we must change all of it. 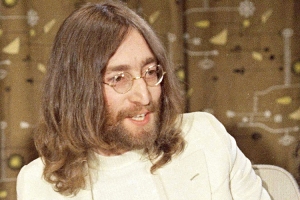 But all that explains why few people get this far. “I wonder if you can,” John Lennon sang about even imagining a different world. And when you speak of a different world, people may dismiss you as a crackpot. Still, we just have to keep talking, and hope someone hears us.