Property is the Root of All Evil

(I hope to continue revising and improving this document; I invite your suggestions.)

For our first 200,000 years we shared everything. But 12,000 years ago we switched to private property, and that was our big mistake (1 Tim 6:10). That has resulted in alienation, poverty, wars, and ecocide, and now we’re on the verge of extinction. It’s hard for most of us to see this, because the corporate press rarely discusses these deeper issues.

In particular, the corporate press never discusses our ALIENATION, which I will address first. Our economic system forces us to compete against each other; rivalry makes friendship difficult; people are alone more than ever before. Our material possessions do not bring us happiness. We fear failure, unemployment, shame, poverty, homelessness. Our workplaces are little dictatorships that objectify, exploit, and discard us; that’s why we hate Mondays. We’re reluctant to complain about low pay or bad working conditions, for fear of trading places with one of the many unemployed. The corporate press presents our problems as individual, not systemic. Our desire to belong to some sort of community makes us susceptible to demagogues, who preach racism, sexism, xenophobia, authoritarianism, all sorts of nasty stuff. It’s no surprise that often one of us goes berserk and starts shooting, or that we can be persuaded to fight in baseless wars.

If we don’t share, we must TRADE. Trade brings greater profit to whichever trader was already in the stronger bargaining position, thus making him stronger still. The rich get richer and everyone else gets poorer; inequality grows; wealth becomes concentrated. That is inherent in trade; it is not possible to reform away the evils of private interest.

Rents rise faster than pay, so homelessness increases. Indeed, even many with jobs are homeless, because rent is so high. Homelessness is criminalized in a variety of ways – for instance, where can one legally sleep? (Matthew 8:20)

Wealth is concentrated, and that is power. Thus we have PLUTOCRACY, rule by the rich. Plutocracy has disguised itself as democracy, but lately plutocracy has begun to discard the disguise. That leaves fascism, the worship of power, the belief that might makes right.

Power is CORRUPTION. That goes both ways:

Of course, some capitalists are more greedy than others, but it only takes a few to destroy the world. The greediest will lie, cheat, steal, and kill to acquire more wealth and power. Perhaps you think I am exaggerating, but I am not. All our wars are mass murder based on lies to make a few rich men richer. Do not think that you can direct a petition to the CONSCIENCES of these people, for they have none. Do not believe that “compassionate capitalism” or “green capitalism” are possible: The market forces the capitalist to put profit ahead of all else; any claims of benevolence are just lies for public relations. (Matthew 6:24)

Any trade is negotiated between buyer and seller, but it also affects other people who don’t get to participate in the negotiations. The side effects are called EXTERNALIZED COSTS, because they are outside the considerations of the negotiators. These costs can be extremely harmful. For instance, pollutants are changing our climate and killing our ecosystem. If Business As Usual continues just a little longer, it will kill us all. That will surprise the rich, who mistakenly believe their wealth will continue to protect them. But money is of little use when all the crops fail.

All these problems are getting worse, but not for much longer:

Why do the plutocrats so foolishly follow a course that will kill even themselves? One possible explanation is that the plutocrats themselves are not really in charge; they too are driven by the system. The market forces them to compete against each other for short-term profits and to disregard long-term consequences. Any plutocrat who loses that competition will cease to be a plutocrat. 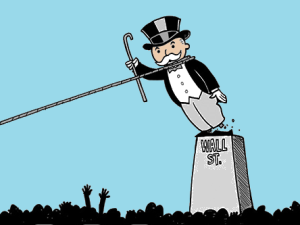 At any rate, the plutocrats have ignored the warnings for decades, and there is no reason to believe their behavior is about to change. To avoid extinction, we must rid ourselves of the plutocrats. But the plutocrats are an inevitable consequence of the concentration of wealth that results from trade. Thus, we must end trade; we must return to sharing and friendship.

Some will say that sharing and friendship are not possible, that greed and selfishness are human nature. Such claims are mistaken. There have been many examples of sharing communities (Chiapas, Rojava, a century ago Catalonia, the early Christians described in Acts 2:44-45). Crises often bring out our best behavior (Solnit’s “A Paradise Built in Hell”). I find further evidence in our hunter-gatherer ancestors and in Sapolsky’s baboons (https://youtu.be/A4UMyTnlaMY).

And so we must spread awareness to most of the 99%. That won’t be easy, for most of the 99% have been brainwashed by one or another of the myths of our time, most of all the myth of private property. To spread good ideas quickly would seem like a miracle, but it is merely a rare occurrence – it is not impossible. Do what you can to help spread the awakening.