I Have A Plan For That

Political activists who call themselves “progressive” see many different and separate problems in our society, for which they are proposing different and separate remedies. Elizabeth Warren has a similar view, and she articulated it well when she was running for president in 2019-2020. She often would describe a problem, and then say

But each of those plans, if it works at all, may have side effects that create new problems, requiring still more plans. The whole system eventually becomes very complicated, like a Rube Goldberg machine.

Or like Ptolemaic astronomy, also known as geocentric astronomy. Alexandrian astronomer Ptolemy (around 150 AD) clung to the notion that Earth was stationary and central, and that all orbits around Earth were circular. This gradually required more and more corrections, more and more auxiliary circles, called epicycles. It’s a little bit like the big fleas having smaller fleas upon their backs, in poems by Augustus De Morgan and Jonathan Swift. 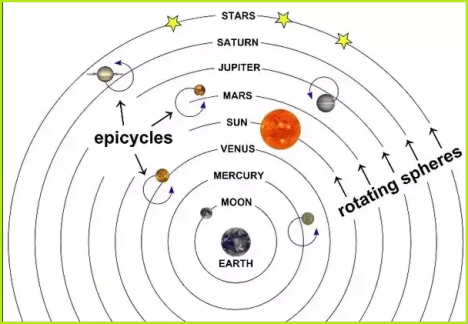 “Geocentric” means “Earth at the center.” Geocentrism was finally discarded in the 16th and 17th centuries, replaced by the simpler and more accurate heliocentric explanations of Copernicus and Kepler.

Carrying the analogy over to our socioeconomic system, capitalism is at the center of our mythology, our society’s belief in how the world works and in what is good, true, moral. Elizabeth Warren, a defender of conventional morality, described herself as

“capitalist to my bones.”

But capitalism, like geocentrism, is based on a bunch of ever more complicated mistakes. Perhaps the most widely believed mistake is that of incentives. One classical form is,

Build a better mousetrap, and the world will beat a path to your door.

That’s Ralph Waldo Emerson, simplified. But that is simply not true. The truth is that

you can get rich if you convince people that your mousetrap is better – regardless of whether it actually is.

And that’s why modern corporations have bigger budgets for advertising than for research and development. Once you set up a system of rewards for good behavior, people will start looking for ways to get the rewards without the good behavior; that’s what greenwashing is all about. Modern corporations are particularly good at this, with their big teams of lobbyists and lawyers, but that is nothing new. The rich often claim that they are “doing well by doing good,” and many of them convince themselves of it, but that doesn’t make it true. Corporations must put short-term profit ahead of everything else, in order to survive in a competitive economic system. Instead of offering financial rewards to greedy people, a more reliable way to make the world a better place is to change our culture so that people want to make the world a better place.

Elizabeth Warren and the “progressives” see many separate problems, but “leftists” like me see a connection between the problems. In my other writings (such as https://leftymathprof.wordpress.com/primer/) I have described how capitalism is the cause of war, poverty, global warming, fear, hate, greed, lies, cruelty, racism, sexism, madness. And I have a plan for that, one single plan to address all the many problems, and its basic concept is very simple: End capitalism.

Admittedly, it will take a while to work out all the details, transforming our entire economic system from top to bottom. But it shouldn’t be difficult to work out those details, if we just keep in mind their one unifying principle: Love your neighbor. It’s not a new idea.